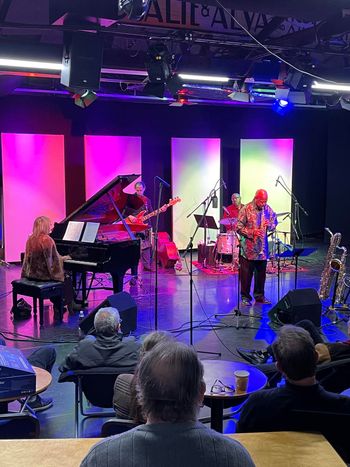 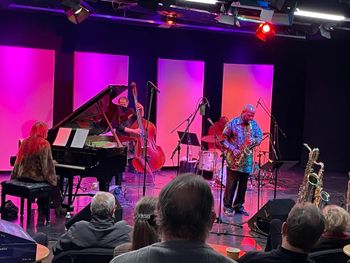 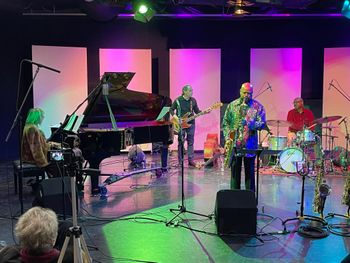 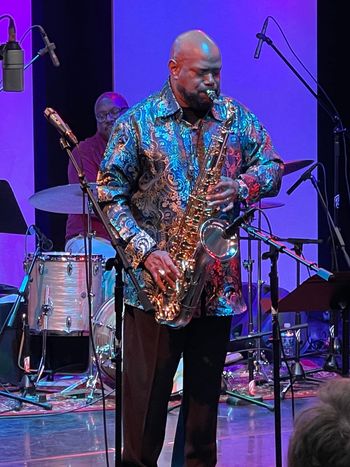 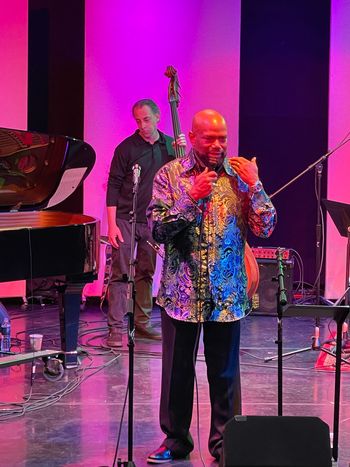 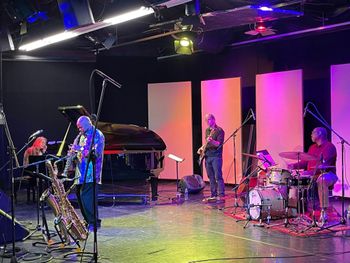 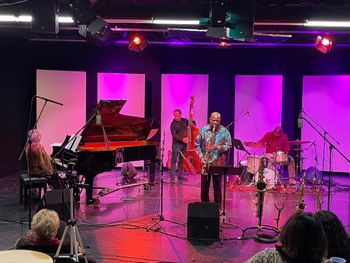 Sponsored by the LA Dept. of Arts & Culture and Depts. of Parks & Recreation, the DFQ performs weekly in 4 LA County parks to celebrate the area's parks reopening after Covid-19. The band will be performing 2 hours of original music with a standard or two thrown in.  As always, the Dale Fielder Quartet delivers a dynamic and interesting performance of jazz music that can be thoughtful while it is entertaining and enlivening.

With this new CD, Fielder and band seem well poised to take things to the next level. Writer Roman St. James writing in the Jazz Review, wrote about Fielder’s “Baritone Sunride,” “The benefit of their long time alliance is obvious. The telepathic-like interaction they maintain is one of the factors that allows this group to rise a notch above in a field that abounds in great jazz groups. If you are a fan of the baritone sax, you will absolutely love this album. Fielder’s chops are unequaled. I honestly don’t believe there’s a better proponent of the instrument alive and playing today. If you’ve never been a bari fan, the explosive creativity and enormous passion displayed on this recording may very well change your mind.”

The group features 2 main soloists in baritone saxophonist and leader Dale Fielder and pianist Jane Getz. Getz is regarded as one of jazz’s living legends. She left a dream career in NYC working with all of the most prominent jazz artists of her time: Charles Mingus, Stan Getz, Grant Green, Charles Lloyd, Rahsaan Roland Kirk, Elvin Jones, Herbie Mann, and even turned the head and piqued the interest of the legendary Miles Davis;; She left New York to move to Los Angeles as a top producer producing sessions with Ringo Starr, John Lemmon, The Bee Gees among many others. She continues as a producer and owns one of Hollywood’s busiest recording studios. Dale Fielder is one of the anomalies in jazz. Inspired by Thelonious Monk, Fielder has always maintained his preference for leading his own bands and playing his own music. As a result, he has become acknowledged as both an important baritone saxophonist and composer. Known earlier in his career as an alto and tenor saxophonist, in 2003 Fielder changed up and began playing baritone sax exclusively with the DFQ. Fielder feels his most natural voice and individuality comes through on the baritone sax than the other saxes which he still plays when called as a sideman.

The DFQ is rounded out by bassist Bill Markus and drummer Thomas White. Markus and White have quickly become LA jazz legends in their own right as first-call musicians working with a whos-who of major jazz talent in LA. As an added bonus performing with the DFQ since 2014 is vocalist Rita Edmond, a leader and top artist as well. Writer Christopher Loudon in JazzTimes Magazine commented about an Edmond CD, “It’s not often that a vocal album suggests the near-certitude of future greatness, but Rita Edmond is of that rare ilk. Backed by a four-octave range, Rita recalls two of the all-time greats: reflecting the vocal power and majesty of Sarah Vaughan, the impeccable timing and phrasing of Carmen McRae, and the intense, natural musicality of both.”

Buy album
View on Bandcamp
The long-overdue release of Scene From A Dream is a historic event. It was not only the recording debut as a leader of saxophonist Dale Fielder but it contains valuable contributions by the late great pianist Geri Allen from 1983.

At the time, Dale Fielder was 25, living in New York with Geri Allen, and in the early stages of his career. Born and
The long-overdue release of Scene From A Dream is a historic event. It was not only the recording debut as a leader of saxophonist Dale Fielder but it contains valuable contributions by the late great pianist Geri Allen from 1983.

At the time, Dale Fielder was 25, living in New York with Geri Allen, and in the early stages of his career. Born and raised in Midland, Pennsylvania, a suburb of Pittsburgh, he began playing music from an early age, studying clarinet, tenor, alto and baritone saxophone, oboe, bassoon, and tuba. “My brother, who was 19 years older than me, indoctrinated me into jazz around 1962,” remembers Fielder. He gained important experience writing and playing with the Fielder Brothers and in high school performing with the r&b group The Ohio Supremes. After attending the University of Pittsburgh, he moved to New York in 1980, took Steve Coleman’s place with the Mighty Sparrows (a popular dance band), and met Geri Allen.

“It was an exciting period for me. Being with Geri, I had the opportunity to see the high level of dedication that she had on a daily basis and was inspired to find my own voice as a composer. At the time I was quite shy but Geri really believed in me. When I got some money to produce a record, Geri pushed me out there and urged me to make this session. It wouldn’t exist if it were not for her.”

Dale Fielder had only recorded once before, two years earlier as a sideman on trombonist Artie Simmons’ album Ababio, and it would not be until 1993, a decade later, that he would lead his second album. While he is well featured on alto during the six songs that comprise the Scene from a Dream project, he saw the project as an opportunity to present himself as a jazz composer. “I’m really out of the bebop tradition and Charlie Parker is in everything that I do musically. But I don’t live in the 1940s and ‘50s and I wanted to write music that was relevant to the period. I used a pulse rhythm as opposed to the swing walking basslines. But at the same time, I wanted to be able to solo with the same feeling over the chord changes that I could on the standards.”

At the time (Feb. 23, 1983), Geri Allen was also near the beginning of her career. She had made her recording debut three months earlier (other than some sets with her college bands) on altoist Oliver Lake’s Plug. However, she was already a long way towards developing her own approach to the piano. Fielder had met Michael Logan when they performed with Artie Simmons’ band. “We became friends, did gigs together, and I always called him to play bass. Drummer Greg Bufford, who was Philly Joe Jones’ protégé, was my best friend in New York. Like me, he always hustled and was ready to play any type of gig.” Percussionist Rob White is technically Dale’s nephew although he thinks of him as his brother. “His Mom is my sister and, since she is 22 years older, Rob is only six months younger than me. He is very successful as a conga and bongo player in Baltimore. On this project, he always fit the mood of the moment and helped to make the music unique.”

Scene From A Dream begins with Fielder’s “Night In Turquoise/Dance Over The Edge, a melodic but rhythmically tricky piece that is partly in 11/4 time with a 7/4 interlude with its main section in 4/4. Written to memorialize a fun night that he had spent in a dance club with Geri Allen, this is a mini-suite with many moving parts that will keep one guessing.

“Fugue 1978” doesn’t refer to classical music but to the state of consciousness between being awake and asleep. The atmosphere is set by Logan’s bowed bass before it becomes an energetic romp in 5/4 time that inspires inventive solos by Fielder and Allen.

Michael Logan brought in “Scene From A Dream” to the session, an original that Bobby Hutcherson was playing at the time. The composer’s unaccompanied bass improvisation (a little reminiscent of Jimmy Garrison) introduces the passionate jazz waltz, launching heated solos including some fiery “sheets of sound” from the leader.

“Les Mots Flottants (The Floating Words)” is named after the title of French writer Anais Nin’s diary which Dale was reading at the time. “Each morning she would clear her mind by taking a walk along the Seine River. I tried to capture the mood of her walks in this piece.” The excitement of starting a new day with endless possibilities can be heard in Fielder’s exuberant solo.

During the era, Dale Fielder and Geri Allen enjoyed playing duets. “The Rain,” a melancholy ballad, is a bit unusual because Allen spontaneously decided to sing wordlessly in the ensembles, one of the very few times in her career that she took a vocal. The date ends with Gregory Bufford’s “In My Youth,” an energetic and exciting samba which features a prominent role for White on congas.

Despite the high quality of the music, these six selections went unreleased until now. The reason is simple; the project ran out of money. “During the past 35 years, it was always in the back of my mind but I was more focused on my current projects.”

Since Scene From A Dream is the length of an LP, Dale Fielder decided to add two complimentary songs to the CD. After permanently moving to Los Angeles in 1988, he worked with drummer Chuck McPherson’s Modern Jazz Disciples every Friday and Saturday night at the Embassy Suites in San Diego during 1989-91. “Leopard In The Night” is the best song of the six that the quartet (which also includes pianist Dave Robbins and bassist David Marr) recorded as a demo on Apr. 27, 1991. A relatively straight-ahead piece, it features Fielder playing effortlessly over the complex chord changes. “Thunderbirds,” which was part of the 2001 album The Hipster, gives listeners an opportunity to hear the mature Fielder performing in a quintet with pianist Danny Grissett, bassist Trevor Ware, drummer Thomas White, and percussionist Rob White.

In more recent times, Dale Fielder has turned his focus to the baritone sax which he originally played in high school. “In 2002 I started playing the baritone again and, the more I got into the horn, the more I discovered that I could develop my own voice on the instrument.” Fielder is frequently heard in the Los Angeles area leading his quartet with pianist Jane Getz, bassist Bill Markus and drummer Thomas Wright, a group that has now been together for 21 years.

Looking back to Scene From A Dream, Dale Fielder says, “Geri passing away this past June shook us up and we thought that it was very important to finally get the recording out to add to her legacy. It is a tribute to Geri and the music that we played together long ago.”